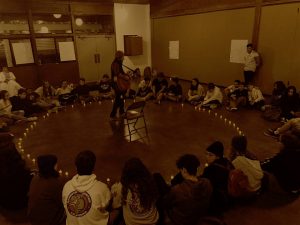 Teens today speak of being stressed and anxious, feeling tensions that seems to transcend levels reported by previous generations. School pressures and what might be called the “psychosis of the social media facade” now merge with a seemingly endless series of mass shootings, contentious mean-spirited national dialogue, an obstructionist political culture, and natural disasters like fires, floods, tornados and hurricanes. Professionals who work with teens report that teens are exhibiting an overwhelming sense of malaise, sadness and depression.

How might synagogues and Jewish communities respond to the needs of teens to express their inner turmoil and to learn new techniques for managing stress and emotional exhaustion?

For the second year in a row, Congregation Or Ami has engaged in Shmirat haGuf v’HaNefesh: Caring for the Teen Body, Mind, and Soul, our Calabasas synagogue’s two year project to transform our entire staff training, synagogue infrastructure, parenting resources through our Center for Jewish Parenting, and youth programming to be able to respond to this worrisome reality.

In response to the Southern California fires and the Borderline Bar mass shooting, Congregation Or Ami collaborated with other synagogues and youth organizations (including NFTY SoCal, URJ Camp Newman and Camp JCA Shalom) to create Pop-Up Teen Retreats. A team of retreat organizers, led tirelessly and intentionally by Rabbinic Intern Elana Nemitoff, our project coordinator, worked diligently toward a dual purpose: to create a relaxing escape for our teens and pre-teens, and to provide an intentional safe space to process the intense emotions. The resulting psycho-social-spiritual approach led to the creation of programs filled with touch points that fostered introspection, self-awareness, and growth of an age-appropriate stress management skill set. Thanks to a grant from the Los Angeles Jewish Teen Initiative of the Jewish Federation of Greater Los Angeles, with funding from the Jim Joseph Foundation and the Jewish Community Foundation of Greater Los Angeles, we were able to offer this high level mental health and wellness programming. 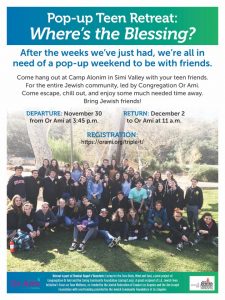 The retreat’s central question allowed teens to delve as deeply or stay as surface as they desired. The teens reflected on how, created b’tzelem Elohim (in God’s image), they each were a blessing. The pop up retreat allowed teens to build authentic relationships based on shared pressures and a commitment to be a blessing for each other. They discovered new ways of helping each other through and beyond the anxiety and stress. They explored the challenges of living in community and reacting to trauma, discovering the blessing in communal process and collective collaboration. Jewish texts from Torah, tefilah (prayer), and Talmud served as the umbrella of wisdom and as guideposts for self-awareness and healthy living.

Explicit moments were established for staff to share their experiences during and since the fires and shooting. This set a tone of introspection and commitment to working through challenges. One rabbi talked about seeking therapy to work through trauma and feeling overwhelmed. Another rabbi described the journey from disillusionment and worry to a commitment to change the cynical reality we face. A third faculty member identified the challenges and power in accepting support after following the loss of a home in the fires. They shared the blessing outward by working to lift others out of the morass that sometimes defines our world.

Volunteer therapists, social workers, and psychologists formed a nefesh (soul) team tasked with helping the staff support the mind-body-spirit rejuvenation of our youth. This nefesh team helped identify concerning behaviors, bringing professional analysis to the staff’s para-professional instincts about potential teens in crisis. Fortunately yet unexpectedly, the nefesh team became a resource for the staff itself, providing a much appreciated opportunity for staff – overwhelmed by crisis response – to reflect and unload their own stress.

After the shacharit (morning) service, our teens delved into the parasha (story) of Joseph and his brothers. Their Torah study focused on creating a Snapchat “Snap Story” from the perspective of one of the Biblical characters. By utilizing the same social media that serves to alternatively isolate and enliven the teens in their own lives, this program created an engaging, direct opening into Jewish perspectives on both the issues raised in the parasha and the juxtaposition of the connecting and isolation inherent within social media. Fascinatingly, the teens themselves articulated in their evaluations and through their Snap Stories that employing the Snap Story for Torah study led to a deeper appreciation for and more expansive love of Jewish learning.

Indicative of the commitment to be a presence for the teens, the retreat culminated, just before the final friendship circle, by asking teens to take out their cell phones and enter their rabbis’ personal cell phone numbers. Of course, limits were articulated on when and why they should text or call. Yet an overarching meta-message was emphasized: the teens should call or text when they are in need. Their clergy made clear our commitment that “we will be there for you.”

Synagogue as a Safe Space

The retreat became yet another opportunity to shape a safe space for escape and exploration for our teens. Beyond providing a one-time experience, our retreat leadership designed a weekend that created opportunities – through prayer, exercise, Torah study, and other fun and learning – to allow the teens to dig deep. Which they did. With adult leaders trained to listen, identify worrisome behaviors, and seek help to guide others, the responses in their written evaluations reflected their deep appreciation for the new skills and stress management techniques.

In today’s world, we cannot guarantee that the world will be kind or compassionate to our young people. However, through an intentional commitment to becoming their safe space, Congregation Or Ami, and our partner sponsoring organizations, including and especially our Jewish Federation, are working in concert to prioritize Shmirat haGuf v’HaNefesh: Caring for the Teen Body, Mind, and Soul.