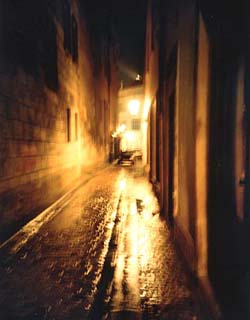 On Chanukah we light the menorah/chanukiah, increasing the light in a very dark world. What is the significance of light in Judaism and Jewish ritual? What purpose did the menorah in the Jerusalem Temple originally serve?

Rabbi Adin Steinsalz offers some answers to these questions in an article that appeared in the Jerusalem Post. The excerpt below are his words. Thanks to Or Ami congregant David Eshaghpour for bringing it to my attention.

Light is the genesis – the creation of the world. The primary utterance of creation is “Let there be light,” its separation from darkness. The Midrash asks – from what was light created? The answer is whispered: “G-d cloaked [Godself] in a white shawl, and the light of its splendor shone from one end of the world to the other” (Genesis Rabba 3:4).

In other words, fundamentally, light does not belong to this world. Rather, it is an emanation of a different essence, from the other side of reality. Light serves as the symbol of good and the beautiful, of all that is positive….

THE TEMPLE menorah, for all its ornate and elaborate craftsmanship, did not serve any practical purpose. It was there as a symbol of the holiness of that place, its relation to light. The menorah was a sphere of sunlight, which shone through the walls and curtains. It is little wonder that this meaning of the Temple menorah was conceived by the Jewish people as the symbol par excellence of Jewish existence, as can be seen in Jewish ornaments from all periods.

The same goes for the Sabbath and Festival candles. Initially, the Sabbath candles were lit for a very prosaic reason – to make light for those who eat the Sabbath evening meal, so that they would not spend the evening in utter darkness. The light of the candles has turned into the very symbol of the Sabbath itself, a sort of “light of the seven days of Creation,” shining in a sanctified niche of time.

The festival of Hanukka is expressed by the ceremonial lighting of candles, which increase daily in number – to symbolize how “light exceeds darkness” in the festival of victory, purification and historic upheaval. So, too, is the tradition for parents to escort their children to the wedding canopy with candles or torches. They are a light of pure joy and hope….


Thus, on one hand we have the light of the Holy place, which does not even have to be seen, while on the other hand is the light of the Shabbat candles, which is to be used. The Hanukka candles are “holy” – we have no right to use them, but only to behold them. The same goes for the messages that these lights convey: glory, the joy of victory, a remembrance of eternity, or an outburst of merriment….
The difference between the single wicks of the Sabbath candles and the braided torch of the Havdala candle is the distinction between a light of calmness, of repose and of homeliness, and the stronger light of the torch – a light with which, on the one hand, accompanies the departing [Shabbat] queen, and on the other, lights the darkness which becomes more marked in her absence. The Hanukka candles stand in one line to mark and count the days, and the shamash (helper or servant) candle, stands apart to indicate that, unlike the other candles, it is there for practical use.

Yet, above all, the function of light is to illuminate. In Judaism, darkness has never had religious significance. The curtain of darkness and mist is the kelipah (husk or shell). And to the extent that light does have a role to play, it is, as the Sefer Yetzirah says, that “the existence of darkness underscores light, emphasizes the yearning for it.”….