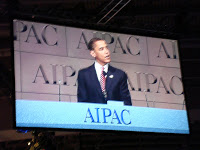 The day after he surpassed the delegate threshold, Senator Barack Obama showed up at the AIPAC Policy Conference to honor and reflect upon the amazing relationship between America and Israel. That this was one of his FIRST stops once he clinched the nomination is a tribute to the intense work AIPAC does to create relationships with leaders on both sides of the political aisle.

The presumptive Democratic nominee came to AIPAC with a purpose: to share his vision of the American-Israeli relationship and to address questions that we have of all candidates – Democratic or Republican – about how they will deepen and secure Israel’s present and future.

Obama’s words were clear; his meaning could not have been misunderstood. He explained, emoted, clarified his connection to Israel, his belief in the importance to America (and to Israel) of this unshakable alliance, and his conviction that this relationship must be deepened and maintained. He said what needed to be said to convince open-minded Jews that he is a very pro-Israel candidate and will take care of Israel and the American-Israeli relationship as well as our best presidents in the past. That he is an amazing speaker, so moving, was well-known. Experiencing it firsthand was so inspiring. You may view his speech here.