We had a fantastic Seder this year. Engaging, inspiring, relevant.

After collecting all the resources, reviewing the Haggadah and planning the Seder activity/discussion inserts, I am always amazed at what actually does and doesn’t happen at the Seder. Since the Seder is an organic gathering – part keva/fixed traditional text; part kavannah/inspiration – the plans for the evening give way to inspired discussion, activities used while others are shelved, and more. Read on for this year’s favorites, including:

Deal or No Deal: Passover Edition
My youngest son created a game, based on the successful TV show. In 18 numbered envelopes (briefcases) taped to a board, he placed post-it notes with dollar values. Each dollar amount was accompanied by a mathematical problem. The bolded number defined the actual number in play. So it might say “$4,000,000 – 4o x 100,000”. The seder participant who chose that briefcase (envelope) had to explain the connection of the bolded number to Passover. In this case, 40 might represent either the number of years wandering in the wilderness, the number of days Moses was up top Mt. Sinai, or one third of Moses’ lifetime (120/3). Some numbers were easier; some more difficult. Almost everyone at the seder got to pick a briefcase.

Where’s Your Egypt? Game
To introduce guest to each other as a way to begin the seder, we played “Where’s Your Egypt. We told everyone that we are taught b’chol dor vador chayav adam lirot et atzmo k’eelu hu yatzah mimitzrayim – that in each and every generation, we each must see ourselves as if we went forth from Egypt. Egypt or Mitzrayim is that narrow, darkened place, from where it is difficult to venture forth, where (initially) you see only pain, problem or hopelessness. Your Egypt could be something personal, something in the world, something in between.

Anyone could answer in any order, but we could not begin until everyone shared their Egypt. They should say their name and answer “Where’s Your Egypt?” Answers included:

What Doesn’t Belong on the Seder Table?
This year, we placed a variety of unholy objects on our seder table: fancy sunglasses, a frisbee, a Guitar Hero guitar, pineapple, watermelon, funny winter hat, extension cord, and more. 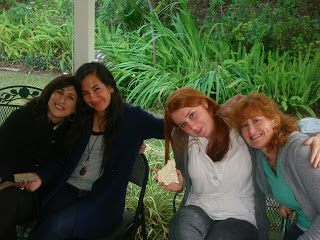 Before we sang Mah Nishtanah or The Four Questions. I taught that the number and types of questions asked in Mah Nishtanah actually changed over the course of history (the reclining question was added in the Talmud because the rabbis liked the number 4 but, since the destruction of the Temple, it no longer made sense to ask the Mishnah’s question about why we eat certain meats). I explained that the great scholar Maimonides would even remove a table from in front of the children so that they would recognize something unique and different. This would provide the entre into the Maggid, or telling the story.

So we divided everyone into teams (mixing people up with people they did not know). Each team received a piece of paper and pen. They had to find at least 6 things on the seder table that did not usually belong. They then needed to decide what this object taught about Passover or the lessons of Passover. After ten minutes of moving around (including the opportunity to eat some of the foods that we dip – veggies, fruits, artichoke dip, sweet dips, etc.), everyone shared something from their list as well as their explanation. If someone had a different interpretation of the object, we shared that as well.

Some of their explanations included:

Progressive Seder: Moving Around During the Seder
We are taught that we recline (or lean left) during the seder because free people would recline on couches when they ate (think “Roman salon”). But even leaning left, a few hours around the Seder table (eating, reading, singing) can seem oppressive. Too uptight. Too formal. So we bring freedom and relaxation to our seder.

Because we live in California, we can take advantage of the beautiful weather to sit outdoors in nature (like the springtime represented by the Karpas). Because we are supposed to be free people, we shouldn’t have to sit in one place around a table for however long it takes to go through the haggadah and eat. So in our home, we felt free to enjoy a progressive seder:

Part One: Chairs in a large circle around two coffee tables. On the coffee tables were seder plates, things to dip and munch on, and other non-traditional items. We enjoyed the beginning of the seder through the Mah Nishtanah outside in nature. The only downside was that a bunch of knats plagued our seder, even dive-bombing our kiddush cups.

Part Two: We brought the food into the kitchen, grabbed our wine cups, and retired to the comfort of the living room. In the living room, chairs and couches surrounding a coffee table with a seder plate, we enjoyed the Magid (story), the symbols explanation (Pesah, Matzah, Maror), read the Jewish World Watch seder inserts, and made our Korech (Hillel Sandwiches).

Part Three: We sat around tables for the Shulchan Aruch, the meal.

Part Four: We returned to the Living Room for the last part of the seder. Relaxed on couches to sing about Elijah, to sing songs, and to enjoy the last two cups of wine.