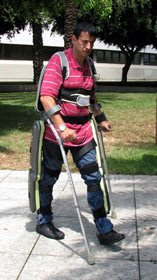 Something of a mix between the exoskeleton of a crustacean and the suit worn by comic hero Iron Man, the device, called ReWalk, helps paraplegics—people paralyzed below the waist—to stand, walk and climb stairs.

One of these new ReWalk users is former Israeli paratrooper Radi Kaiof, who was injured in 1988 while serving in the Israel Defense Forces. “I never dreamed I would walk again,” Kaiof told Reuters. “After I was wounded, I forgot what it’s like. Only when standing up can I feel how tall I really am and speak to people eye to eye, not from below.”

ReWalk was invented by engineer Amit Goffer, founder of Argo Medical Technologies, a small Israeli high-tech company. “It raises people out of their wheelchair and lets them stand up straight,” Goffer said of his contraption. “It’s not just about health, it’s also about dignity.”

When Goffer speaks about dignity, he understands all too well. He was paralyzed in an accident in 1997 but he cannot use his own invention because he does not have full function of his arms.

ReWalk, which requires crutches to help with balance, consists of motorized leg supports, body sensors and a backpack containing a computerized control box and rechargeable batteries. The user picks a setting with a remote control wrist band—stand, sit, walk, descend or climb—and then leans forward, activating the body sensors and setting the robotic legs in motion.

The ReWalk is now in clinical trials in Tel Aviv’s Sheba Medical Centre, and Goffer said it will soon be used in trials at the Moss Rehabilitation Research Institute in Pennsylvania. Slated for commercial sale in 2010, ReWalk will cost as much as the more sophisticated wheelchairs on the market, which sell for about $20,000, the company said.

Click here to learn more about the ReWalk system.