Alzheimer's and dementia attacks the foundational values of who we are as Jews and Jewish families. We Jews consider ourselves the people of yikzor (remembrance): as long as we remember where we came from, we will have a sense of who we are and where we are going. So what happens when we can no longer remember any of that?

END_OF_DOCUMENT_TOKEN_TO_BE_REPLACED 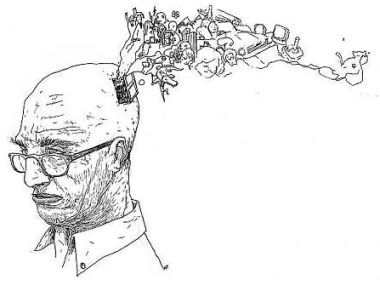 Alden Solovy, a gifted liturgist, wrote a new prayer to be said upon receiving a diagnosis of Alzheimer’s or Dementia. As with all his prayers, it is heartfelt and beautifully written. His work is available on his To Bend Light, an overwhelming collection of poems for today.

I share this prayer with you here, in memory of my grandma Esther Kipnes who died many years ago from this horrible disease. I shared her story in Broken Fragments: Jewish Experiences of Alzheimer’s Disease through Diagnosis, Adaptation, and Moving On (Doug Kohn, editor, URJ Press).

Diagnosis with Alzheimer’s or Dementia

G-d of compassion,
Stand with me in the days ahead.
I am [frightened/angry/sad /confused/defiant][add a description of your emotions].
Grant me time to remain
Mentally, physically, spiritually and emotionally present
For my family,
For my friends,
And for myself.

Grant healing power to my treatments
To keep this disease at bay.
Give my physicians knowledge and insight
And my caregivers skill and perseverance.
Grant scientists and researchers tools and understanding
To develop new treatments,
Speedily, in our day.

Ancient One,
I need Your care,
Your consolation,
And your loving hand.
G-d of old,
You are my Rock and Redeemer.

The Jewish community is aging, and Jewish communal leaders are facing up to this reality.  We are contemplating what Sacred Aging looks like (including a new book Seekers of Meaning by Rabbi Richard Address, D.Min.); our Union for Reform Judaism among others is developing new resources.  Next spring, we hope to see the publication of Broken Fragments, a book about Jewish perspectives on Alzheimer’s disease, dementia, caregiving and more. I am honored to have written a chapter on how the Jewish community can respond with compassion and Jewish support.

Guided by the Biblical Psalmist – Cast me not off
in the time of
my old age;
when my strength fails,
forsake me not (Psalm 71:9) – we seek to prepare for those seemingly inevitable moments when we find our parents, our loved ones, or ourselves beginning to enter the haze of dementia.

Recently, someone dear to me wrote about his beloved’s new diagnosis. His words are poignant and eye opening.  With his permission and some edits to preserve anonymity, I share his reflections.

Dementia in the Family

My wife and I are in our 80’s. A short time ago, we were sitting in our living room and she asked me, “What is our granddaughter’s name?”

Almost immediately a red flag went up. I told her what the name was and suggested to her that we make an appointment with her internist, which we did.  At her appointment, the internist gave her a little test which she flunked, leading the doctor to suggest she see a geriatric specialist.

When the day of the appointment arrived, we were ushered into the doctor’s office and he explained that he would give her a few simple tests over the next 20 or thirty minutes. After taking these tests, he excused himself and said he would take a few minutes to evaluate the results of the tests he had given.

On his return, he explained that my wife was showing the beginning of dementia, and he explained what he meant by dementia, and what could be done about it. He explained further that he would like to place her on a medication regimen. He told us that the medication was not a cure, but should slow down the process. The medicine he recommended was Aricept, 5mg. tab daily. He also suggested a couple of vitamins (D and B1) that he indicated were important.

We started her on this medication and indeed it seemed to work. We did not notice any improvement in her short term memory, but it did not seem to get worse, and her long term memory was quite good.  She was still able to run our household; she played bridge every week and things seemed to be working.

At the end of six months we went back for further testing and she seemed to be able to do at least as good as before and perhaps a bit better. The doctor told her to use the same medication in the same amount.

Omigosh, I thought I was Talking to our Son

At this time, she is about the same except for the following: twice now, she has been looking at me but talking to our son. This confused me at first but both times she snapped out of it and said, “Omigosh, I thought I was talking to our son.”  We scheduled another appointment with geriatrics.

Time has passed (about six months) and we had our evaluation with a new geriatric physician. Most of her blood tests are O.K. and she has lost about two pounds. No big deal. Her short term memory has become a bit worse but her long term memory is better than mine. She has shown a little more confusion than before. She still plays bridge, but with a bit less enthusiasm than prior games; this might be a memory thing. She still does the shopping and the meal planning and of course she plans her personal care (hair and nails). Her doctor increased her medication from 5 mg to 10 mg, and made us a follow up appointment for six months from now.

The past few days have been the first time she has verbalized where she may be headed and she has been extremely unhappy.  We all are.

I have used some home-spun psychology but I feel it is not enough and I need to be sure I am going in the proper direction. Fortunately, I know a great psychologist and my next stop is to meet with him.

Our Hearts Ache As We Hear Such Stories
We want to reach out and support. Synagogues cannot seem to do enough to reach out to our loved ones who faced with dementia and Alzheimer’s disease, or are caregivers for their loved one.  So at Congregation Or Ami, we try:

Still, it never feels like we are doing enough.

Do you have any suggestions on how to reach out – Henaynu, we are here? Please let us know.