How do we talk about God when so many of us have such conflicted, confused and challenging concepts or relationships of/with God?

As a community about to jump into major community-wide conversations about God, Congregation Or Ami necessarily will face this conundrum.

When at Yom Kippur Kol Nidre services Rabbi Julia Weisz, Cantor Doug Cotler and I deliver a collaborative, multimedia sermon about God, we will strive to speak openly about what we know and what we do not know, what we believe and what we do not believe.

Similarly, every parent, teacher, adult, child, Jew, Christian, Muslim, Buddhist, believer and non-believer will be invited to struggle with their beliefs about God. Openly. Honestly. Aloud.

Teaching about God and Spirituality 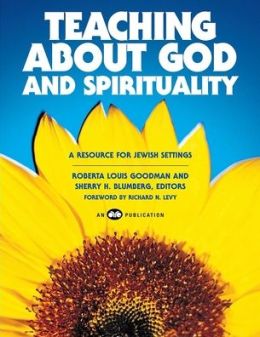 In Dr. Sherry Blumberg’s Teaching about God and Spirituality, we face the challenge head on. As you read on, try to read yourself into the role of the “teacher.” How does this text speak to you?

What if the teacher is unsure of his or her own conception or feelings about God? Can an atheist or agnostic Jew teach about God? A person who is going to teach about God needs to have examined his or her own belief, and tested it in the light of Jewish criteria, namely, metaphors, concepts, and views of God found in texts or expressed by Jews throughout the ages. For example, a person questioning why bad things happen to good people could examine, among other things, views on the concept of free will, the Book of Job (the biblical classic text on theodicy), or the responses of Holocaust survivors to that horrifying experience.

Perhaps thinking about the agnostic or the atheist teacher raises the deeper question of whether or not a doubter or a non-believer can or should teach about God. The best teacher to teach about God is one who has a deep religious faith, and yet doubts, questions, and struggles with his/her understanding of God. This person exemplifies the Jewish seeker, one who is actively engaged in a relationship with God. Therefore, I would rather choose the agnostic teacher who can honestly search with the students, than the confirmed atheist, or even a person with a conception of God that doesn’t allow for any disagreement or flexibility.

Jewish seekers seek understanding, meaning and connection. Jewish belief may be religious, spiritual or even intellectual. The best part is the conversation.

An Invitation to Talk God
Are you intrigued by discussions about God? Are you interesting in exploring different Jewish concepts of God and of Jewish spirituality?

We gathered together, a dozen Jewish tenth graders and me, their camp rabbi, for discussions about God.  I sat them down and, figuring we were about to share some deep thoughts, I invited them to introduce themselves by explaining why they chose this group. Some didn’t believe but wanted to find a way to believe. Others wanted to know why bad things happen. One teen was just looking for a place to talk about the really important issues of religion.

I looked around the circle, smiled at them, and said (in my best “Valley Grrl” impression), “OMG WTF!”

To those well versed in the shorthand of texting, OMG WTF usally means “Oh My God, What the &@#%!”  Few expected such language from the mouth of their rabbi.

Of course, I explained that I meant, “Oh My God, Where’s The Faith?”

We all live in a gorgeous world of wonder and possibility, but so few of us talk about holiness, or spirituality or God. So I asked, “Where’s the Faith”?

It is right here at the URJ Camp Newman in Santa Rosa, where a dozen teens are sitting together sharing their deeply held ideas and questions about faith, belief, disbelief and about God. Here at Camp Newman we take on the most challenging topics, which for teens seems to include intense questions about God’s existence.

So I invited them to pick one of four ideas, which most closely resembled their ideas:

Then we challenged each other to collectively determine the top three reasons they picked this idea.

Then we talked. Choosing among these four arbitrary choices forced participants to examine their beliefs and articulate to others their reasons why. With ground rules that honored the multitude of opinions about God, we engaged in an energetic exchange. My role was merely to ask questions, to help them clarify their ideas, and to identify where their opinions paralleled significant Jewish philosophers. Thus we found teens speaking the thoughts of Martin Buber, Abraham Joshua Heschel, the Baal Shem Tov, Spinoza, and the theologies of monism, panentheism, and Kabbalah to name a few.

Informed by the faith development work of Professor James Fowler, I patiently allowed for the agnostic and sometimes atheistic thoughts of the campers. While hewing very closely to the Principles of Reform Judaism which presuppose One God yet allow for a multiplicity of ways of describing and connecting to that One God, we invited challenge and response.

I must say that these discussions are amongst the most enjoyable that I have had up here at camp this summer. Serious kids talking about serious topics. Deeply personal one minute; hysterically laughing at a joke the next. Although God is a topic like sex, drugs and death which make many parents feel squeamish, here at Camp Newman it is just one of the topics that permeate this sacred space we call Camp Newman.

In fact, one colleague reported that immediately after she finished plunging a toilet in one of the camper cabins, the staff members said “thank you” and then peppered her with questions about God.

OMG WTF.  It seems like God is part of the conversation at so many different times: when things are good, when we are worried, and when the #[email protected]& begins to flow.