The most amazing things happen when we bring together 1000 teens for five days for the convention of the North American Federation of Temple Youth, one of the largest gatherings of Jewish teens anywhere. It is the way that these teens open up about the pressures, worries, fear and self-doubt that bubble just beneath the surface of their smiling faces.

So the NFTY convention organizers, and their Union for Reform Judaism partners, interspersed – between the fun, food, inspiring prayer, motivating speakers, meaningful social justice activism, and Jewish learning – a series of serious workshops which allowed the teens to bear their souls within the supportive security of a loving groups of teens, and the guidance of nurturing, trained adult youth workers.

Talking Truth about Leaving Home
“Take two post-it notes, and write on them your top two concerns, anxieties or agitations about leaving home and family as you go off to college. Stick them on the wall. Now without talking, read through all the answers and as a group collect together similar responses until we have a small number of categories.”

These instructions guided 34 Jewish teenagers, who chose to grapple with the myriad of issues surrounding “Leaving Home and Family … on the path to college.” With openness and honesty, they wrote about, and later talked about, their concerns:

Then in triads, each shared his/her concerns as the others listened nonjudgmentally and brainstormed supportively.

Convening the Conversation, Then Getting out of the Way
Between us, my wife Michelle November and I have plenty of experience working with youth. The former director of the North American College Department for the then Union of American Hebrew Congregations, 16-year synagogue Program Director, and active Camp Swig/Newman alumna, Michelle now works intensively with teens and their parents as the Associate Director of Admission for Los Angeles’ New Community Jewish High School (in West Hills, CA). A former Jewish summer camp director, NFTY regional advisor (CRaFTY), and chair of the Camp Newman rabbinical camp committee, I serve as rabbi of Congregation Or Ami (in Calabasas, CA), whose leadership heard and responded to the call of the URJ’s visionary Campaign for Youth Engagement. Together we have two college kids and a third in high school.

Michelle and I have made it our life’s work to support and guide Jewish young adults through the highs and lows of their exciting existence. Still, for the conversation, like so many other talks with teens, our task at convemtiom was to gently guide, slide in the Jewish and the compassionate, but mostly to get out of the way.

Crowdsourcing Confidence and Kindness
Sitting on the floor, back in one circle, the students took turns revealing what they feared. Then crowdsourcing took over as the group offered ideas from their collective experiences:

The workshop concluded with a group hug /slash/ prayer circle in which we asked the Holy One for courage, patience, and perspective as we walked these uncharted path to our future. We sought strength and sechel (smarts) to remember that we are precious now, and we will be equally precious later as we traverse the paths. And we offered thanks for the loving support of a Jewish community that cares.

Where else, outside of home, do teens find unconditional love and complete acceptance? Where else do Jewish teens receive positive messages about who they are and nurturing guidance of Jewishly motivated adults? Most importantly, where else in their pressure cooker, anxiety-filled existence do they have a place where they can share their innermost thoughts and worries, and we adults know that they will find support, openness and loving direction to put them on a path toward healing and inner peace?

So get your kids into NFTY and Jewish camping. Support your synagogue efforts to expand and fund their youth engagement activities. The future we secure will be our own.

Teens can be so surprisingly inspiring. 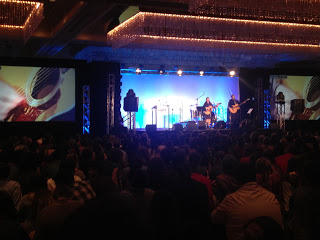 At home, we sometimes used to struggle to feed balanced meals to our 3 teenagers. Imagine trying to feed 1000 as these Jewish teens sat together to for Shabbat dinner. And that was only the beginning.

We are gathered at a hotel in Los Angeles for the NFTY Convention, perhaps the largest Jewish teen gathering around. NFTY, of which our kids are third generation members, has brought together teens from all over the US and Canada (and also, I heard, teens from Israel and a half dozen other countries) for five days of fun, socializing, Jewish learning, energetic music, teen issues, social justice activism, eating, talking, laughing, singing, dancing, praying …

This is not your Grandfather’s Davening (worship)
Growing up in many a synagogue, most teens experience prayer as a formalized experience. Lots of responsive readings mixed in with serious music. Over time, our Ashkenazi ancestors, and their American Reformer descendants, articulated a formalized experience, with precise words and structure, and instructions of when to stand and sit, and just how to bow. Services at the NFTY convention were anything but that. I imagine some of our Jewish ancestors might be turning over in their graves if they watched these 1000 NFTYites pray.

Because our teens sang energetically, chanted meaningfully and swayed with joy and abandon. It was meaningful. It was exciting. And just so inspiring. It was more early chassidism then early reformer.

The early European chassidim transformed the Jewish prayer experience from the staid to the emotional. They taught their adherents to open themselves up by singing and dancing, to lift themselves beyond the “here and now” to the hopeful and the passionate.

Prayer can be spine-tingling, bone-shakingly uplifting
Yes, spread out all over the ballroom floor, our teens sat and sang a beautifully melodic prayer. But as the energy built up, the inspiration ramped up, and before we knew it, kids popped up onto their feet. Singing and swaying, dancing and clapping, they became the modern definition of hitlahavut, joyous enflamed passion.

Perhaps that best describes this indescribable experience. More than prose, this teen tefilah is poetry in its wholesomeness and all encompassing nature. It is chassidic hitlahavut, combined with Martin Buber’s I-Thou relationalism, mixed in with Debbie Friedman-inspired musicality.

I turned to Rabbi Rick Jacobs, President of the Union for Reform Judaism, the parent body of our congregations, and the older sister to NFTY. Praising the scene we were witnessing, I shared my frustration at my inability to find the words to capture the wonderful spiritual transformation we were witnessing. He nodded knowingly, as he smiled appreciatively, clearly touched by the expansive displays of prayerfulness surrounding us. We clapped on.

God was in the House!
Most synagogues would celebrate if a dozen teenagers showed up at Shabbat services on a regular Friday night. How would it feel when 1000 attended? Awesome. Just awesome.

Rabbi Jacobs began his story drash asking, “Is NFTY in the house?” The thunderous response assured us all that they were.

Had the question been a bit different – Is God in the house? – I feel confident, the answer would have been the same.

Prayer that Wows
Thanks NFTY. Thanks URJ. Thanks Rabbi Dan Medwin of the CCAR for the Visual Tefilah. And the unnamed shlichay tzibur (prayer leaders). For a spiritual, musical, inspirational tefilah.

Yes, God was in the House!