During this pandemic, we can Pay It Forward, taking care of a whole web of workers, businesses, and organizations that have long cared for, served, or sustained us.

END_OF_DOCUMENT_TOKEN_TO_BE_REPLACED

I stumbled upon the NU Campaign – music video and t-shirts – to help Israel’s Carmel region, which recently saw the worst forest fire in Israel’s history. I loved it so I bought a few shirts. Take a look, then buy yourself a t-shirt. 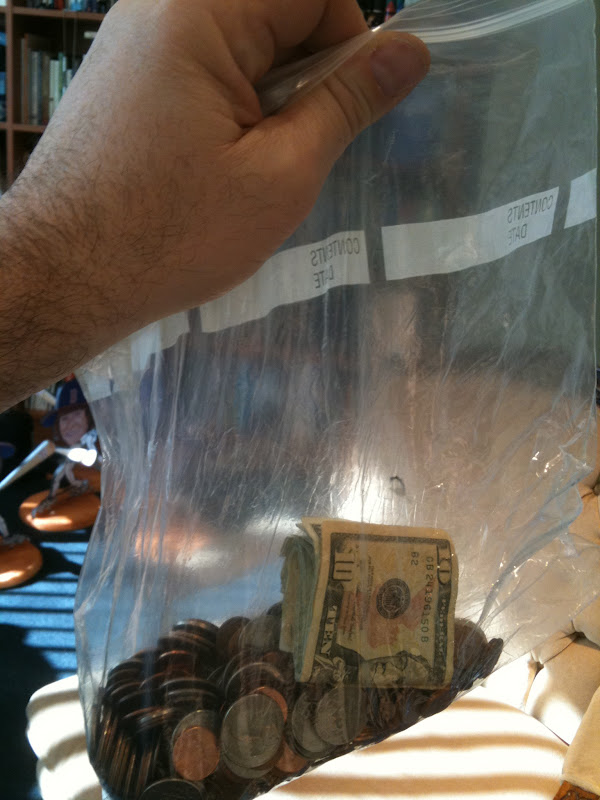 Three children walk up to a rabbi after services, requesting to speak with him.  The oldest, almost eleven, speaks for the other two nine year olds.  With maturity and poise, she explains that each Shabbat and during other holy days and regular days, the three of them put tzedakah into their tzedakah box.  It is part of their regular ritual welcoming Shabbat and it is very meaningful to them.  When the box became too full, they opened it, counted it, and with a small donation from their parents to make it even, they have $54.00. (Actually, they actually collected $55 but used one dollar to “seed” their next tzedakah collection drive, ensuring that this donation was a multiple of chai (18=life).  So pictured above is the gallon-sized ziploc bag filled with pennies, nickles, quarters and dimes, plus a few bills.  Kid tzedakah, I call it.

Kid tzedakah may be the most important kind of tzedakah of all.  Although Kid Tzedakah is not listed on Maimonides’ Ladder of Tzedakah (8 Rungs of Tzedakah) which weights the different ways of giving, I believe that we should place Kid Tzedakah somewhere in the top three.  Kid tzedakah is the ziploc bag or piggie bank or tzedakah box filled with coins which young children bring into their synagogues and give to the rabbi, or bring to other organizations and donate to support other causes.  Kid Tzedakah usually amounts to a multiple of 18, never over $72 or $90.  It never is listed on donor boards or donor honor rolls.  But it is the most precious of all.

Kid tzedakah is the way that one generation ensures that the other understands the importance of giving. It is the process, set up by parents, to make giving tzedakah a regular practice of the next generation.  For a certain generation, Kid tzedakah was given to Keren Ami (the fund for Israel, usually through the Jewish National Fund) whose blue and white tzedakah boxes once sat in every Jewish home.  Today, sometimes Kid tzedakah is synagogue-based, when our children donate regularly at the beginning of the Religious and Hebrew School classes.  Other times, it is the ritual of placing a few coins into the tzedakah box before lighting Shabbat candles.  Some people allow the children to collect the coins that come out of parents’ pockets and place them weekly into the tzedakah box.

Kid tzedakah may be the lifeblood of the Jewish people, ensuring that our children understand that giving of our resources – money, and yes, time and energy – is central to being a Jew.  That when we sing in our prayerbook – L’takein olam b’malchut Shaddai – that we fix the world, returning it to the idea envisioned by God – this is the essence of Judaism.   That the ritual of giving must continue into their adult lives.

So thank you, Gross family children, for giving your $54 of Kid Tzedakah.  We will use it to help families in our community who are struggling through this difficult economy.  We will ensure they have food on their tables and a roof over their heads.