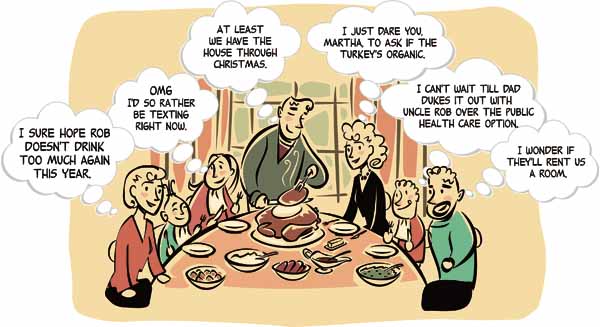 I had a great conversation with a Daily News journalist. He turned out an interesting article on Thanksgiving table talk.

A battered economy, political divisions and an erosion of common courtesy could make family feasts tough to swallow this Thanksgiving, By Kevin Modesti, Staff Writer

All over the United States today, families and friends will express gratitude for their blessings, share in the proverbial bounty of the harvest, and enjoy the company of loved ones.

And try not to get into food fights over politics or finances.

It’s often a challenge for relatives to maintain a properly warm and loving atmosphere on Thanksgiving, given the risk that siblings and cousins might stir up more grudges than gravy.

But it could even be harder in a year when economic stresses and political divisions seem particularly sharp, commentators decry a breakdown of social civility, and the juiciest topics for dinner-table conversation could trigger arguments.

“During difficult times, all other tensions are amplified,” said Rabbi Paul Kipnes of Congregation Or Ami in Calabasas. “In a sense, we can expect these tensions to be amplified around the table.”

What to do about it? Other than make sure nobody gives thanks for Sarah Palin just as stridently liberal Uncle Fred lifts the carving knife?

Some face the threat with humor.

“This Thanksgiving,” satirist Andy Borowitz wrote on Twitter, “I will exercise portion control and only insult one relative.”

Others see it as a serious problem with practical solutions.

The Emily Post Institute, run by great-grandchildren of America’s original arbiter of etiquette, chose Thanksgiving week to ask readers of its Web site how they “handle a boorish relative’s inappropriate table conversation.” (We’ll get to the results.)

And still others see it as a potentially uplifting part of the Thanksgiving experience, encouraging families to temper their stresses and differences of opinion by emphasizing their joys and their more fundamental common values.

Michael Gerson, a family and child psychologist who teaches at California Lutheran University in Thousand Oaks, acknowledged that economic and political unpleasantness is all around us.

“But I don’t think it has to come into the home (when a family gathers),” Gerson said. “Oftentimes, the home becomes a sanctuary for peace and comfort. It’s harder if your home is in foreclosure.”

On the phone from the Emily Post Institute in Burlington, Vt., Dan Post Senning, a 32-year-old great-great-grandson of Emily Post who specializes in the company’s Web site, offered suggestions for keeping, say, a shouting match over health care legislation from wrecking the tranquility.

If possible, avoid a divisive topic. “I’m not saying, `Avoid it forever,’ but avoid it during a Thanksgiving meal that Mom has taken a long time to prepare and people have traveled a long way to enjoy,” Post Senning said. “The rule of polite dinner conversation is you avoid questions of religion and politics.”

Think of more pleasant things to talk about. “We give the same advice to people going to business gatherings: Have a couple of topics of conversation in your pocket,” Post Senning said. “It could be general stuff like, `Did you see the last episode of “Jon and Kate”?’ or it could be stuff in your own life. Or it could be something you’re thankful for.”

If an opinionated relative is bound to mouth off, prepare yourself to listen without being drawn into an argument or making it personal. “If you have an uncle (with) a conservative streak you find abhorrent, remind yourself people are not likely to persuade each other over the Thanksgiving turkey,” Post Senning said. “The issues are going to be there to settle another day.”

Be an observer. Post Senning suggests that instead of getting embroiled in a fight, you watch and listen to that opinionated cousin with the detachment of an anthropologist, using the occasion to learn about views other than your own. By asking someone how he or she arrived at this philosophy, and explaining the roots of your own beliefs, you might find more in common than you expected.

Be sensitive. At a time when family members might be going through widely different experiences financially, “remind yourself what everybody’s situation is,” Post Senning said.

This advice is meant for most families but not all.

“For some families,” Post Senning said, “it wouldn’t be a good dinner if we didn’t have a chance to hash out our differences.”

At emilypost.com, the poll on what to do about inappropriate table talk found a majority choosing the option: “Engage the offender, try to steer the discussion into safer territory.”

Rabbi Kipnes said he’s urging congregants to look around the table today and “tell each other why they’re thankful these people are in their lives.”

He also wants people to remember that, while they can enjoy a plentiful table, many others in the nation aren’t as fortunate.

Said Gerson, the psychologist: “As much as the dinner can be anxiety-provoking, it can also be looked at as an opportunity to create a festive and supportive environment.”

Gerson said that at the Thanksgiving table, as in politics and economic analysis, “It’s all in how you spin it, I suppose.”