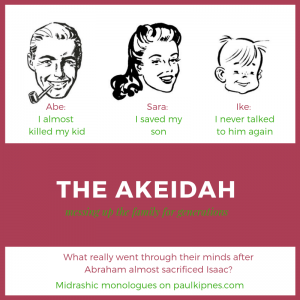 In parashat Chaye Sarah (“the life of Sarah”), we learn that our biblical matriarch Sarah lived 127 years, she died, and Abraham purchased her burial cave in Hebron (Gen. 23:1-3). Sadly, the only Torah portion named after a woman provides few hints about her life or final days. As Dr. Carol Ochs notes, “It is disappointing that Sarah’s life is only hinted at in the portion that bears her name, and we are left to fill in the blanks only from events as told from Abraham’s perspective (Ochs, “Sarah’s Obituary“).” In this Midrashic monologue, we imagine Sarah at the end of her life, recounting a most difficult experience, and her unheralded role in it (adapted from a modern midrash by Faith Rogow in Taking the Fruit, Modern Women’s Tales of the Bible). We imagine Sarah saying:

I remember lying quietly in our tent. Abraham had fallen asleep beside me. My mind drifted, back to my favorite memory of the day when three guests came to tell me I’d soon be pregnant. After so many years!? I actually laughed in disbelief until the Source of Life reassured me it was true. With Isaac, God gave me one of my life’s great joys.

Suddenly, Abraham began stirring and called out, “Hineni, Here I am.” He began to talk with God. As I often did, I pretended to be asleep to listen in.

At first what I heard made little sense. Though I could only hear Abraham’s responses, I sensed that God requested something involving our son Isaac.

Abraham’s stead voice suddenly quivered. I thought I heard him say the word, “sacrifice.” Had the Eternal One just commanded that my husband sacrifice our only son?

Now why would God, who had given us Isaac, take this special gift from me now? And without even speaking directly to me! For a moment I wondered if was my punishment for our treatment of Hagar.

Through cracked eyelids, I witness my husband be overcome with sadness. I had never seen him so sad, not even when we were commanded lech lecha to leave his land and his father’s house (Gen 12).

Strangely, I could see in Abraham’s face that he truly believed that God wanted him to sacrifice our son. I wanted to urge Abraham to challenge to God as he had before at Sodom and Gemorrah (Gen 18-19). But Abraham’s eyes burned fiercely and for the first time he excluded me from contemplating God’s message (Zohar on Gen. 12:5; Ellen Frankel, The Five Books of Miriam: A Woman’s Commentary on the Torah, p. 27). I felt powerless to insert myself in what had passed between them. Finally, Abraham fell back asleep, though fitfully as if struggling with a demon.

I would give up my life before I would let Isaac be harmed! I would not offer my firstborn for sacrifice (‘I Will Not Offer,’ Ra’aya Harnik in The Torah: A Women’s Commentary). The Merciful One who had blessed us with a child would not now take him away.

I needed air. I stepped outside to think. I walking aimlessly around the camp’s altar and spied Abraham’s special knife. I trembled as I thought of that knife sliding against Isaac’s throat.

What was God looking for? Why would God suddenly seek reassurance of our commitment? I remembered God’s promise that our offspring would inherit this land and become a great nation (Gen. 12:2). I always assumed that Isaac and his future bride would follow in our footsteps to lead as heads of the tribe, but I never considered just how they would inherit our commitment to serving God. Abraham and I were not getting any younger. If we were to pass on the covenantal responsibility, it would have to be soon. Perhaps God was hinting that it was time for a journey together, to meet God on a mountaintop and begin the transition of spiritual leadership to the next generation!?

My heart began to pound as I realized Abraham had misunderstood. God was commanding an offering to help transmit leadership to Isaac. A sacrifice of the finest of our flocks was called for, not a sacrifice of Isaac. I realized then, that the future of our people depended upon me. I had to prevent a nonsensical death, and ensure our continued covenant with God. It was on me.

I hoped Abraham would figure this out himself. But in case he did not, I had to intervene. So I went back to bed and with my eyes closed, I planned my next step.

Abraham got up early, gathered his supplies, and took off with Isaac. He didn’t even try to wake me. No explanation; not even a kiss goodbye.

As soon as they were gone, I gathered my supplies and took our finest ram. I followed carefully, hiding in the shadows. At dawn on the third day, as they slept, I hurried up the mountain, releasing the ram into the bushes.

The rest happened so quickly. Abraham was holding the knife, about to sacrifice Isaac. He seemed to be in a trance. So in my voice that he often called “angelic,” I called out, “Avraham, Avraham.”

That broke the trance. Realizing what he was about to do, he dropped the knife. He looked up, saw the ram that I brought for him to sacrifice instead, and stepped toward it. Relieved at having saved my son’s life, and grateful at having ensured the survival of our people, I was exhausted. I cried and cried.

Then I lay down on the ground for what I I sensed I would sleep for a long, long sleep.

More on the Akeidah:

What Abraham was thinking (about how he really blew it)